The TIME Style & Design November 2008 issue is on newsstands now.

Here’s a look at the new issue: 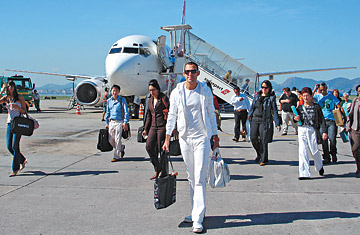 TIME Style & Design’s Marion Hume traveled to several of Australia’s low-profile, far-flung islands to give readers inside tips on how to get to them, where to stay and what to do. Hume writes, “Less widely known is that [Australia] is surrounded by what are arguably the most diverse outliers of any country-from coral cays in the Great Barrier Reef to remnant volcanoes in the Pacific.”

Diane von Furstenburg tells TIME about where she likes to shop while traveling: “At bookstores. I buy books everywhere I go.” Her favorite city: “There are so many … I love Paris, Istanbul, London and, of course, New York.” Her best packing tip: “Travel light, very light, and take things that can work in many ways. When you figure out how to pack lightly, you figure out how to live lightly.” Her favorite hotel: “I love Claridge’s in London. Martin is the best concierge in the world, the sheets are the most luxurious linen, and the breakfast is perfect.”

Mario Batali on his favorite city: “Bologna is the best city in Italy for food.” The best nightlife: “Ho Chi Minh City. No other comment necessary.” His favorite restaurant: “Da Zaccaria in Amalfi, Italy, serves the purest form of linguine with clams on the planet.” A place he will never go again: “The Hamptons are usually filled with what I had hoped to leave behind in New York City.”

Maria Sharapova on what’s in her carry-on: “My Sony Ericsson phone charger-because if my bags get lost, I would be more upset about losing my phone battery than my new pair of Manolos.” Her packing tip: “Never overpack; you are always going to acquire new goods along the way.”