To Save A Life is an indie movie about the real life challenges of teens and their choices. TO SAVE A LIFE opens in select theaters on January 22, 2010!

Watch TO SAVE A LIFE movie trailer here:

Ever since Jake Taylor was a kid, he was the type of guy you couldn’t help but like. For Jake, life is good. He has a ton of friends, a basketball scholarship, a hot girlfriend and a really bright future. Not much to get down about, right?

Enter Roger Dawson. He was Jake’s childhood best friend before Jake’s growing popularity pushed him out. Tired of not fitting in and having a place to belong, Roger walks onto campus and, with a gun in his pocket and pain in his heart, makes a tragic move.

Jake is devastated by what Roger has done, and something in him changes. In seeking answers in his own life, one question plagues him the most: Could I have saved him? He finds himself deeply compelled to reach out to kids on the fringe – kids who aren’t viewed as cool enough. But this decision among other things, threatens Jake’s world. He may lose his friends, his scholarship and even his reputation by asking “What do I want my life to be about?” 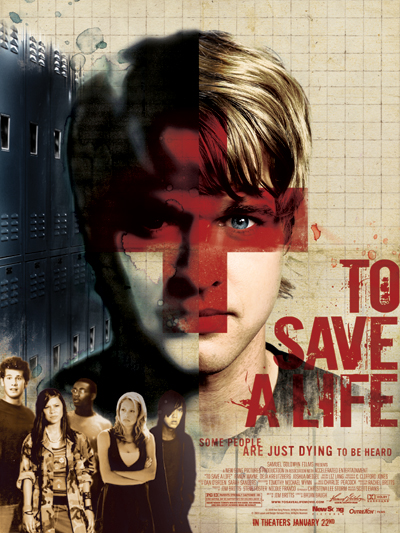